A unique literary festival in the online space, Blogchatter Writing Festival aka #BlogchatterWritFest facilitates learning through interaction with authors. The participants access the sessions as they are beamed live on Facebook and Instagram with real-time conversations happening on Twitter.

A gathering of readers and writers and conversation around books, #BlogchatterWritFest is the perfect kind of festival. We have a bevy of authors across genres conversing with community about their writing journey and the literary motifs in their work. 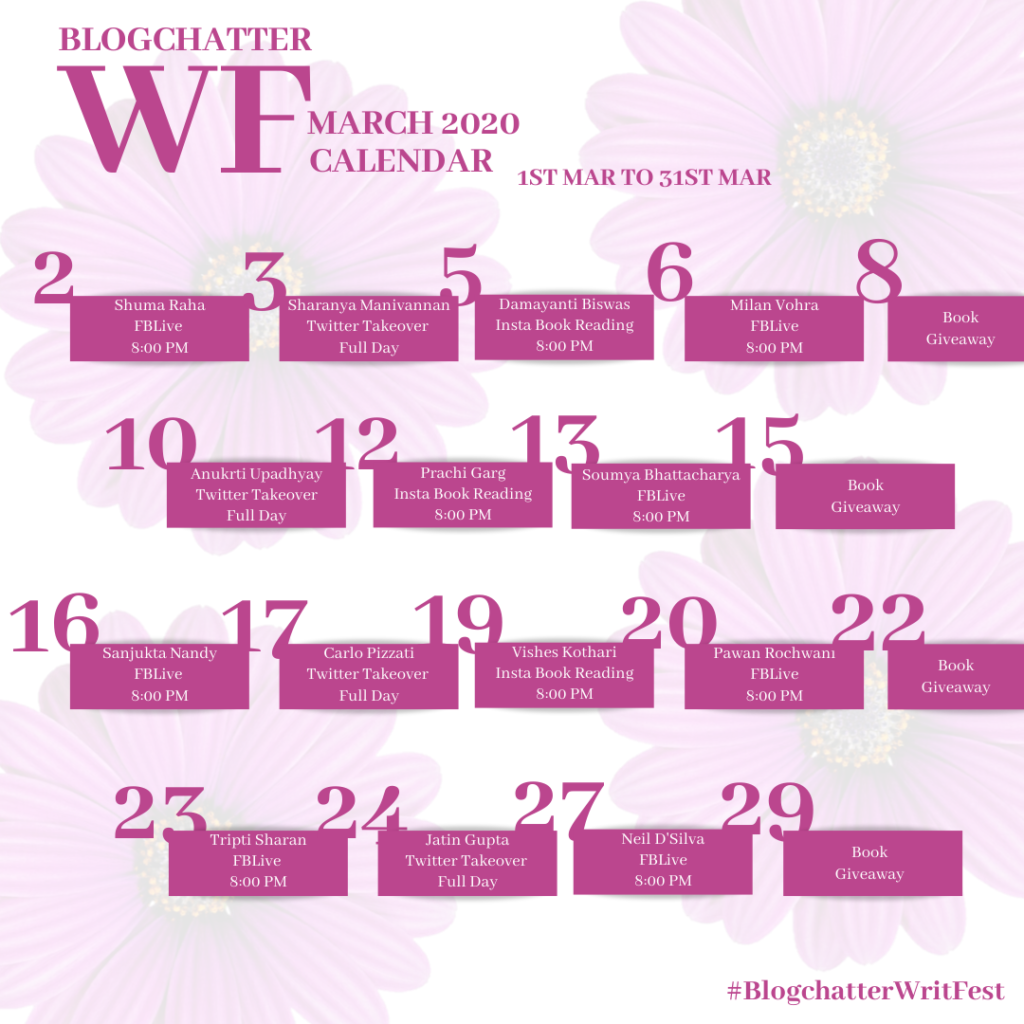 KNOW THE AUTHORS OF #BLOGCHATTERWRITFEST 2020

Shuma Raha is a journalist, writing columns for Indian and foreign publications and formerly with The Telegraph and The Times of India. She was the winner of the Juggernaut Short Story Prize (2017) and her work includes a collection of short stories and literary translations. Her novel The Swap explores love and relationships in a contemporary setting.

Sharanya Manivannan is the author of The Queen of Jasmine Country, longlisted for the JCB Prize for Literature (2019). Her other books include the short-story collection The High Priestess Never Marries, two books of poetry, Witchcraft and The Altar of the Only World, and a picture book for children, The Ammuchi Puchi.

Damyanti Biswas’ debut crime novel You Beneath Your Skin is an Amazon bestseller.  Her short stories have been published in magazines in the US, UK, and Asia, and she helps edit the Forge Literary Magazine. She was awarded The Fay Khoo Award for Food + Drink writing in 2019.

Milan Vohra is an advertising professional and has been Creative Director at India’s leading advertising agencies. She is known as India’s first Mills & Boon author. Her books have been mega best sellers and acquired for screen adaptation. Milan also writes short stories in YA, women’s fiction and humour. Her latest book Our Song is a romance centred around music.

Anukrti Upadhyay is the author of two critically acclaimed English novellas, Daura and Bhaunri and a collection of Hindi short stories, Japani Sarai. Her short stories in both these languages have been published in prestigious literary journals. She has worked as an investment banker in India and abroad and is working with Wildlife Conservation Trust.

Prachi Garg is an author, motivational speaker, and entrepreneur. She is the founder of www.ghoomophiro.com. She delivers workshops on entrepreneurship at major B-schools. Her recent book, Startup Secrets From the Ramayana is the latest in a series of books on entrepreneurship featuring siblings, couples and women.

Soumya Bhattacharya is the author of six critically acclaimed books of fiction, non-fiction, and memoir. His work has appeared in the New York Times, Guardian, Sydney Morning Herald, Granta, New Statesman, and a host of national and international publications. He has contributed to several anthologies published in India and abroad. He is the managing editor of Hindustan Times. His most recent book is a work of fiction titled Thirteen Kinds of Love.

Sanjukta Nandy is a writer, an architect, and an avid movie buff who has experienced the film industry upclose. She has written television scripts, doctored film scripts and co-produced a film. Her book ‘Khantastic’ is about the Khan trio of Bollywood.

Carlo Pizzati is the author of seven books of fiction and non-fiction. He is a political analyst for la Stampa and a professor at the Asian College of Journalism. He’s been a correspondent from various locations over the world. His latest book Bending over Backwards is about a journey across the world to cure a backache.

A financial consultant by profession, Vishes Kothari has a keen interest in the oral and musical traditions of his state, Rajasthan. He has been associated with UNESCO-Sahapedia on projects and with the Jaipur Virasat Foundation as a language expert.  His latest translated work Timeless Tales of Marwar, presents Vijaydan Detha’s folk tales to a wider audience.

Pawan Rochwani is the founder of Platform for Artists which encourages artists to turn their passion to profession. He is the host of the podcast When We Met and has led the creation of the anthology Unread, one of the largest collaborative ventures that has turned into a book with 99 writers.

Dr Tripti Sharan is an eminent gynaecologist and an author. She has written two books on the life of medical practitioners, which are anecdotal and based on real life experiences.  Her recent work Being Radha is a story in verse. She writes poetry and contributes to anthologies as well as writes non-fiction for media.

Jatin Gupta writes both fiction and non-fiction. He has written on the sporting star, Saina Nehwal. His recent book, Kali Yuga The Ascension combines mythology and fantasy. He is the Head of Operations at a leading gaming company and follows his passion of writing.

Neil D’Silva writes primarily in the horror genre. His books and stories being adapted for screen on various platforms. He is the founder and festival-director of Mumbai’s interschool litfest, Litventure, and mentors aspiring writers. He conducts writing workshops and has also spoken on a TEDx stage on the art of writing a bestseller.

Come join #BlogchatterWritFest, the month-long celebration of reading and writing.