Why the Yearly Flu Shot is Beneficial and Protective

There are over 30 to 50 lakh cases of severe episodes (8 lakh being children under the age of 5 years) of influenza with nearly 2.9 – 6.5 lakh people dying of this disease every single year. The infection tends to be worse in countries like ours that have tropical climates, often present throughout the year. The good news for parents is that vaccines are already available for the flu. As per WHO, India is categorised under Southern Hemisphere Tropical Asia Vaccination zone. The best time to vaccinate is during the monsoon. 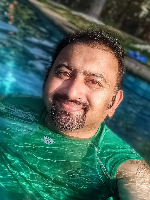 Kerala based anaesthesiologist Dr Roshan Radhakrishnan believes in the healing power of love and laughter but practices medicine just to be on the safe side. Winner of the 'Best Blog in India for Creative Writing' in 2014 and 'the Best Blog from Kerala' in 2017, writing consistently at his personal website Godyears.net since 2005 has paved the way for over 25 of his short stories to be published till date in various anthologies including Love Stories That Touched My Heart and Chicken Soup for the Indian Doctor's Soul. The only Indian to have won First place in both Season One and Two of Write India, India's largest literary contest, his primary genre remains human kindness, health and public awareness. His articles on violence against doctors, healthcare, suicide prevention and outbreaks such as Nipah and COVID19 have been featured in various media platforms including The Times of India, NDTV, Outlook and The Huffington Post.