Gurdev shushed him and asked his parents to wait. He went to the window, parted the curtain and peered outside. The LaSalle was there, by the side of the road, Akbar sitting in the driver’s seat, awake. He opened the front door and ushered his parents out and to the car, shutting the door behind them. He parted the curtain and watched them get into the car. He came back to Riaz Baig and shook his hand.

‘This isn’t goodbye, Bhaijaan. Noor and I will be back tonight after our pilgrimage to Ajodhan,’ Gurdev said loud enough for his voice to carry into the kitchen. 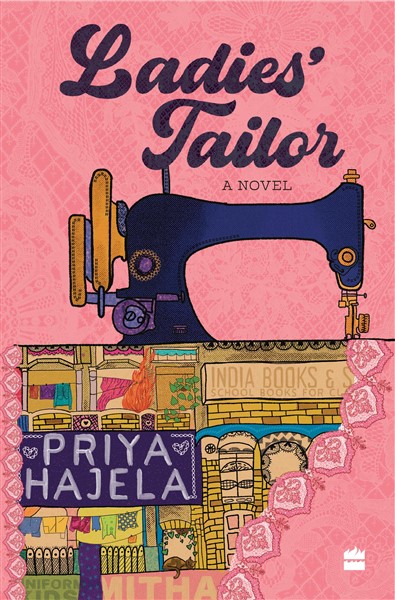 ‘Thank you, Shakeela Aapa, I will personally make these besan laddoos and feed them to Urmila as soon as I get back and then make sabudana laddoos after delivery, for abundant milk production, I remember,’ Noor chattered and made her way out as Gurdev blinked his eyes rapidly. That had become their sign for ‘beware – danger ahead’ now.
‘Chalo, we will see you in the evening, upon our return from Ajodhan. If it’s not too late, we’ll wake you up and tell you all about it,’ said Noor.

Gurdev wanted to shove her out of the door to stop her from talking but had to politely wait till she finished, then mutely walk behind her. They waved to the Baigs from the driveway and got into the car. Gurdev’s parents had crouched down in case anyone was watching.

They set off, out of Model Town and on to the highway, both old people crouched down but peering out of the window as they passed their former home. Gurdev had to gently push them down again because if they hadn’t already found out, the present residents of the house soon would, that their forced tenants had vanished. The car picked up speed on Firozepur Road, towards Lahore City and soon came to an intersection, right towards Okara and left towards Kasur.
Akbar turned right towards Okara and continued rapidly on the highway. The journey was long, everyone sitting up now, Gurdev turning around every now and then to look for a tail. He didn’t see anyone till they were about an hour into the drive. A black car, American, but he didn’t recognize the make, drove on to the highway from a side road and stayed behind them for a while. Gurdev asked Akbar to pull over on the side. He got out and hunched down by the front tire away from the road and peered up but with his head down.

The black car passed them, driving fast. He waited for two minutes till they could no longer see the car on the horizon and got back in. They drove on and only stopped to fill petrol once. Gurdev didn’t ask anyone if they were hungry, no one said that they wanted to eat. There was tension in the car that Gurdev knew he had created. He hadn’t told anyone the plan. Noor, he knew, was quiet because of his parents’ presence and because she couldn’t guess what was on his mind. He also knew that she did want to go to Baba Farid’s grave and pay her respects. It was for nothing but the spiritual specks that she probably thought still floated around the place he had lived the longest and the place he died.

When they were about four hours into their journey with Akbar stating determinedly that they were only an hour away, Gurdev saw the black car by the side of the road. There were only two occupants. Both stood outside, smoking cigarettes, doing little to hide. They jumped into the car and followed as soon as Akbar raced by. Gurdev was making this as easy as possible. He needed to keep them believing that they were doing exactly what they had planned to do.
The group reached Ajodhan a little after 2 p.m. Akbar parked as close to the city gates as he could. Gurdev looked around but didn’t see the black car. It would be waiting outside the city on the main road, the occupants certain that the group would go back the way they came. Any other way was long, the road not as good.

Gurdev ushered his parents and Noor into one of the gates into the city and towards Baba Farid’s shrine. Akbar had told him that there had been six gates around the walled city but only four remained. They first found a place to eat. Chapli kabab, haleem and nihari – all mutton dishes, all Gurdev’s favourites, his mouth watered as he stood outside two small dhabas, both with menus written in chalk on a small board behind the cashier and owner of the establishment. He picked the second one and they ate, Gurdev constantly looking at the time. Everyone was hungry and the food was like he remembered frontier food to be. This food was not available in Lahore and not in Delhi, although enterprising businessmen had begun selling Mughlai food, a combination of Punjabi and frontier food in street stalls.

After eating, Gurdev rushed the group through to the Nuri Darwaza, the Gate of Light at Baba Farid’s tomb, and gave them five minutes to gather all the spirituality they could find. He pushed them back to the car and called Akbar aside to talk to him. Akbar nodded at everything he said but shook his head violently for one thing. Gurdev patted him on the back and whispered something in his ear even though no one was listening.

The two men got into the front seats of the car, and Akbar pulled out of the busy streets and back to the edge of the city.
‘This is not the way we came,’ Noor was the first to notice. ‘No, this is definitely not the way we came,’ said Papaji. Biji didn’t say anything but she, too, looked perplexed. ‘We are going back a different way. Those men following us, they will be waiting for us on the road we came in because that is the safest way back. This other way goes through Kasur. The road is rough and it will take us more than seven hours to reach Kasur. We can stop for toilet and petrol on the way but nothing else.’

‘But why are we doing this? All we’ve done all day is drive. You didn’t even let us stay at the shrine for ten minutes. You know, Guru Nanak also came to Baba Farid and talks about him in his teachings,’ said Papaji.

The group settled in, the three in the back dozing off and on but no one for too long because they didn’t want to miss anything. Several hours and three stops later, they reached the outskirts of Kasur.
‘Drive into Kasur village, keep driving till you reach the end,’ Gurdev told Akbar.
‘Bhaijaan, what are you doing now?’
‘Akbar, drive. You will not regret it. And no one will know.’ Akbar drove, his hands shaking, his mouth quivering with religious verses that he never thought he knew. It was past 11 p.m. Jagtap wouldn’t be there till midnight.
‘No, no, don’t stop, Akbar. Keep driving. I want to go through to the end of the village.’

They saw no one on the road, no trucks, no cars, no bullock carts nothing. Akbar drove right through on a village road, bumpy and rocky, tossing the occupants of the back seat side to side.

As they approached the end, there was a single sign that said ‘Pakistan-India Border Approaching.’

On the other side, there was no checkpost, no gate, no wall, no fence, only a shiny Dodge DeSoto, with its lights off, engine off parked one hundred metres away. They all got out, looked around, saw no one. Akbar got out too. He smiled. ‘This is how it should remain.’
But for now, the group walked towards the car. The driver remained inside.

Gurdev indicated to the rest to wait as they crossed what appeared to be the border while he went on to the car. The driver lowered the window.

‘Jagtap Prahji, you came early? We could have waited for some time. Now, there is a small problem. That old couple with Noor, you have to take them with you and come back for me again, same time, same place, every day. If I don’t come for three days running, you can assume I am finished and send the couple to Delhi with Noor. She’ll know what to do. Or you can call Sangat and let him know they are coming. He’ll pick them up from the station or airport – whatever is possible Prahji.’

‘Gurdev, I have been coming early because Sangat told me that you are never late, always early. Who are these people, Paaji? Are they your parents? You look like their child. I’ll be here every day. You do whatever you have to do.

Although, you have done the important job, no? This even I would have cut my hair for and come.’

‘I’ll be back as soon as I can. Till then, take care of things. Wait for me in Amritsar unless...’

Noor helped Biji into the car. Papaji got into the front seat. Noor shut both doors and turned to Gurdev.

‘I’m staying here with you and coming back with the boys,’ and she turned and walked back towards Akbar, who sat inside his car, engine running.

Gurdev didn’t argue, he waved to the car on the India side and walked back to the Pakistan side.

‘Let’s go back to Model Town, Akbar. I don’t have to tell you...’
‘Janab, what time shall I come tomorrow?’

‘11 a.m. Give us some time to rest and rest yourself. Only rest. No talking. We have to go back to Liberty Market tomorrow morning. Noor Madam wants more bangles and other things. These women, when they have one of something, they want two, in case the first one breaks. Why not break the first one and then buy more, I ask? But how will she get back to Pakistan, she asks. And nothing from Pakistan will ever go to India, she says. Maybe someday some things will but they’ll be so expensive. These ladies, they have everything worked out. I don’t know when they do all these calculations, but they do and they are so precise, so certain, at least the women I know are. Are all women like that, Akbar?’

Noor kicked the back of Gurdev’s seat as he sat beside Akbar chatting away, trying to take his mind off other things. His parents for instance. He had abandoned them so readily so many years ago but had risked what he had come to do to get them out. That’s how things worked, he reasoned. Sometimes not as per plan. He was glad they were alive – more than glad, he was relieved. As old as he was and as long as he had been on his own, there was something about a sarcastic father and a doting mother that took his breath away.

As they approached the intersection where they had, that morning, turned right, Gurdev noticed a car by the side of the road, the black car with the two men in it. Gurdev asked Akbar to turn his lights off so that he could better see into the car. As they slowed down to make the turn, he saw that both men were asleep. They had come on the good road and reached several hours before them. He knew that they would be watched more closely the next day.

Excerpted with permission from HarperCollins.

Read reviews of the book here.