As creative individuals, we often think about content creation and content marketing as integral to creativity – and rightly so. But we forget we need to do creative thinking as well if we want to create content that is different.

I attended a creativity workshop a while ago. I’ve summarised a couple of activities we took part in and shared the insights that I gleaned from them.

The following qualities of breaking barriers, thinking laterally and perseverance are necessary for every creative individual. It is often difficult to measure creativity in an individual, but there are several things one can do to stoke it.

We were asked to measure the room in square coin meters i.e. how many coins would it take to cover every inch of the room we were seated in. People came up with all kinds of answers after several minutes of calculations. Finally, we found out the trainer didn’t have the answer herself and the answer wasn’t important.

She just wanted to see if we would impose restrictions on ourselves and limit our thinking. She asked us what had stopped us from actually taking a coin and measuring at least one panel of the room and then multiplying it by the total number of panels. Answers ranged from laziness to it being too cumbersome. She said creativity was all about breaking such barriers.

Next time when you create content, try not to go through your usual checklist. If you have a process, do everything opposite to that process. If you have a preferred genre, surprise your reading buds and try a different one. If you hit a wall when creating something, instead of tracing back your steps to find your mistake, try climbing/breaking the wall. 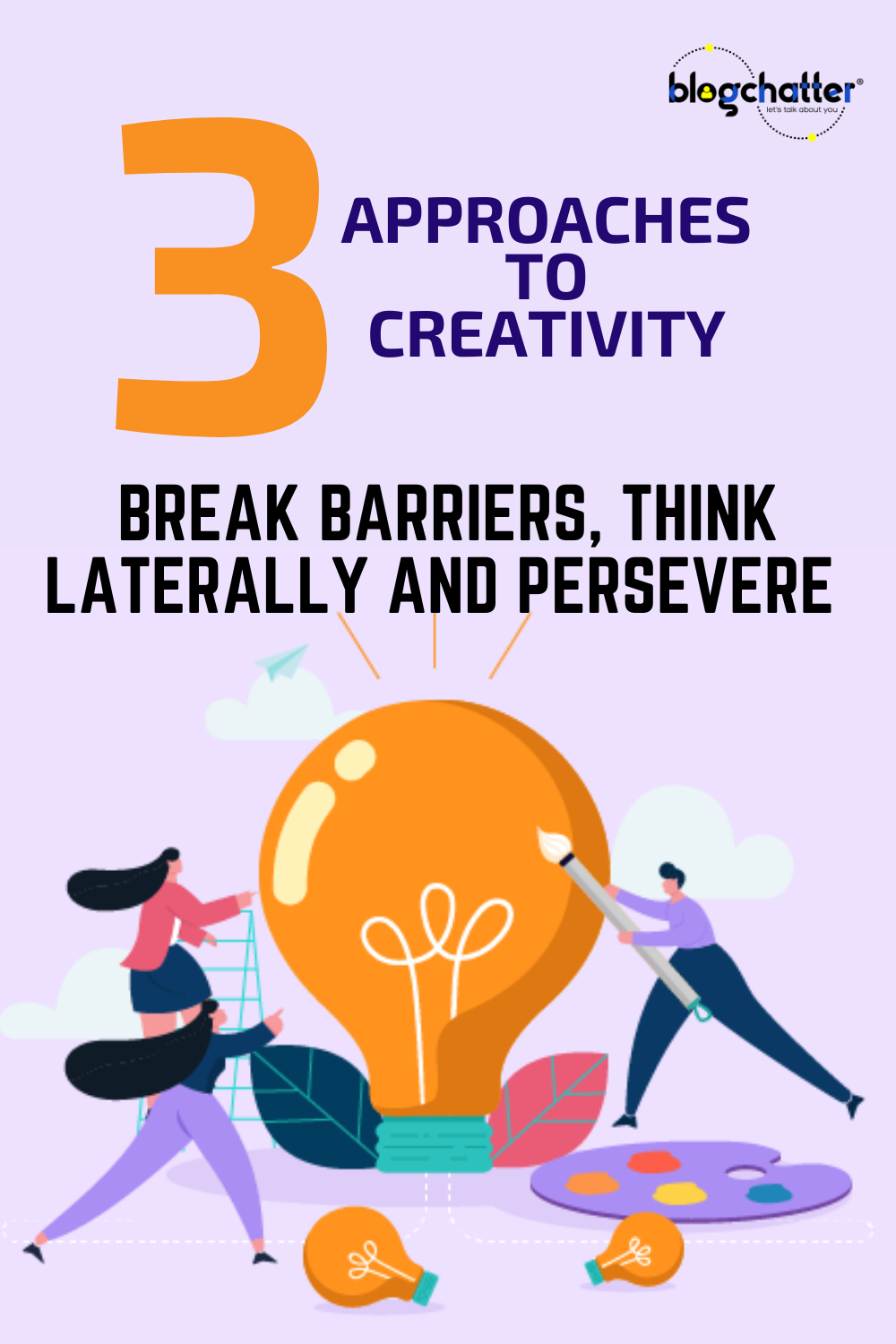 We played group games that involved identifying ten unusual uses for each of the three objects assigned to every one of the four groups. For example, a window grill can be used as a support for creepers, a cup can be used as a flower vase and so on. After compiling ten unconventional uses for each item, we had to list them one by one and the group next to us had to guess the object we were talking about. The fewer clues they needed to guess, the higher the marks they obtained. This game tested our lateral thinking.

Edward De Bono’s books on lateral thinking offer more insights into this topic. It is a common test that is given to test one’s divergent thinking and is often referred to as “the unusual uses test”.

An article I read recently, however, outlines the drawbacks of such tests and advocates different tests such as the ‘story completion’ test.

I was late. My alarm hadn’t gone off, my ironed clothes were a mess and when I tried to switch on my laptop, it made a god awful grrr grrr sound. Dishevelled and cranky I sat at my desk only to notice…

Naming the founders of Google (Larry Page and Sergei Brin), Bill Gates, Sir Isaac Newton and Oprah Winfrey as creative individuals who have made a name for themselves, our trainer said they all had one common trait: Perseverance.

To illustrate the quality of perseverance, she told us about the vanilla ice cream and Pontiac story. General Motors had designed the Pontiac, a dream car. But there was one customer who had a peculiar complaint relating to the car. He said whenever he went to a particular store to buy ice cream, the car would not start on time if it was vanilla that he bought. Any other ice cream and the car would not pose any problems. After repeated complaints from this man, the head of General Motors sent someone to investigate this odd grievance.

It turned out that in the store the man frequented, vanilla was the flavour that was stacked in front of the store since it was the most popular one. So whenever the man bought vanilla, the engine didn’t have enough time to cool off before it could start again. Since the other flavours were stacked at the back of the store, by the time the flavour was delivered to the car, the car had time to cool and so the engine would start.

General Motors could have just ignored this criticism as a frivolous one, but they didn’t and upon investigation, a perfectly reasonable explanation was found and the problem fixed. So we learned that no matter how bizarre something sounds at first, we should try to make sense of it. It could lead to solutions.

The thing that I love about creativity is how I can put guardrails on it to force my mind to think laterally, and then to break barriers just for fun. But, without perseverance and work, none of it will go anywhere.

Don’t forget to comment if you do one of the exercises!