Celebrating the history of trans people- Transgender Day of Visibility

Over the years, transgender movements have been increasing and it was only in the early 2000s that anti-discrimination laws were passed to protect trans community. From ever since we can remember, visibility and basic rights have always been a struggle and hiding one's identity is extremely traumatic. It can make people a target for discrimination and violence. Transgender Day of Visibility celebrated on March 31st acknowledges the numerous contributions made by people within the trans community.

We have some groundbreaking stories worth telling in our country today. Tarika Banu cleared her HSC exams with flying colours as the first registered transgender in Tamil Nadu. She had run away at 16 when she was rejected by her family. Adopted by an activist Grace Banu, today she pursues her dream of becoming a doctor.  Anjali Ameer became the first transexual female to be cast as a female lead in Indian cinema. Hailing from an orthodox Muslim family,  she didn’t gain acceptance. It had been a huge personal struggle as she moved places living with transgender communities, trying to discover herself. Her family is now her biggest support system as they eventually came to terms with and understood her identity. Gauri Sawant, a transgender woman stepped above the societal description of motherhood when she adopted a baby who would have been sold to an agency after she lost her biological mother. She is an activist and the director of Sakhi Char Chowghi that helps transgender people with HIV.  She was also made the goodwill ambassador of Maharashtra’s election commission. Before diving deeper, can we steal 3 minutes of your time to show you a beautiful ad by Vicks on mother's day featuring Gauri Sawant?

Many such stories cover the radiant spectrum of gender today. Despite the LGBTQ community being large now, we are still not entirely aware of the many achievements of trans people in history. 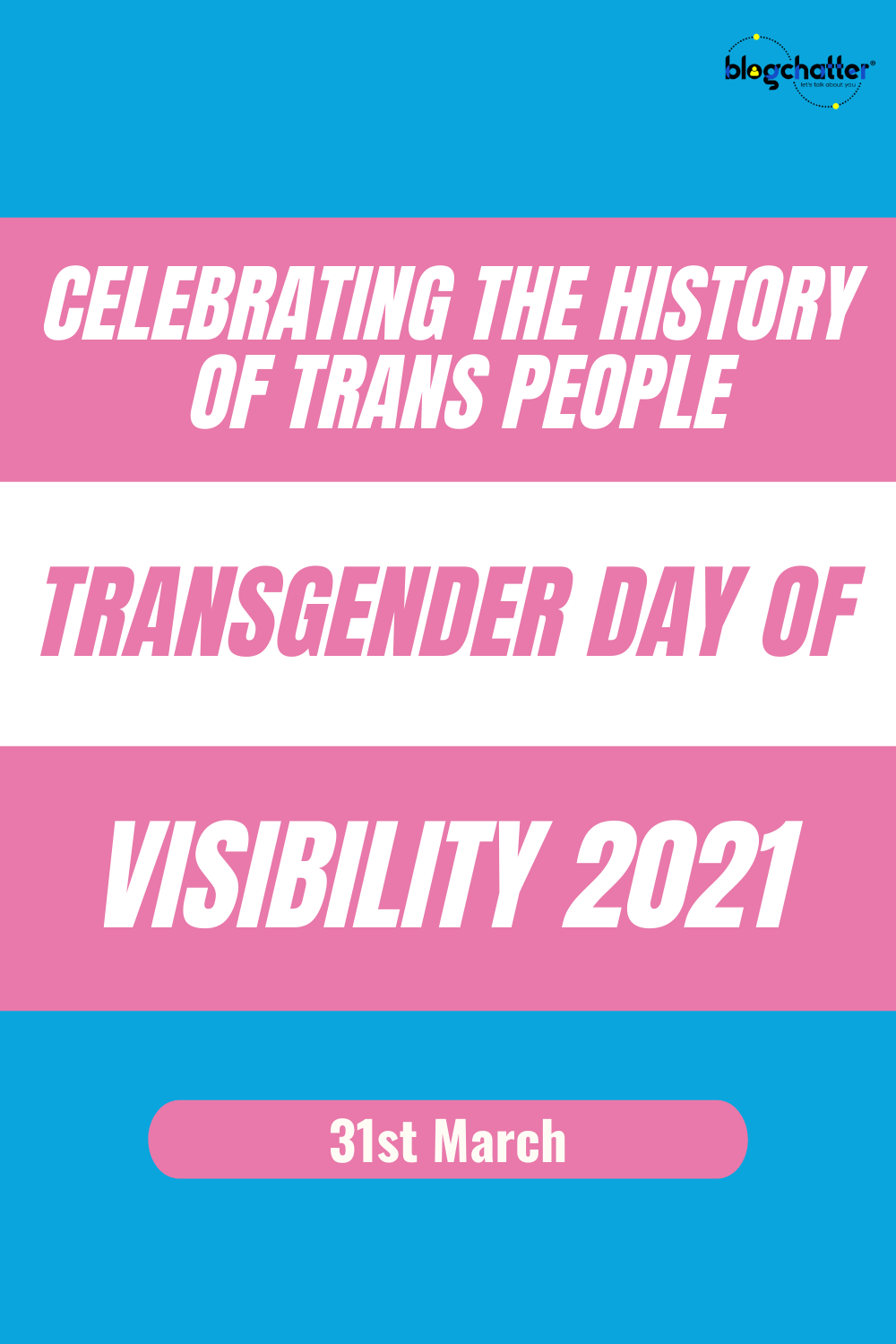 Trans people have always existed as long as society existed. If we go back in time around 12,000 years ago during the Neolithic and Bronze Ages, we have unearthed drawings and sculptures that give us some insight into the early existence and depictions of trans people in ancient civilizations.

Learn more about the timelines and history of gender here. Today to celebrate transgender visibility, we have picked a few people in history who stood up for who they are and paved the way for us.

Probably one of the oldest entries in this list, Hatsheput was one of Egypt’s most successful pharaohs, ruling Egypt for almost 22 years. Female rulers weren’t even considered at that time so she dressed like a man, wore a false golden beard and even used female and male pronouns. She reportedly didn’t give up on feminine displays of jewellery and make up and historians claim that her concern for preserving tradition was behind male presentation but maybe her gender fluid expression could be an earlier account of trans male life experiences? Calculated efforts were made to erase records of her reign after her death. Read more about stolen histories here. We will never know for sure how she personally identified, but she did put in a lot of effort to present as a man.

Eleanor Rykenor: (based on the only records dating 625 years ago)

Eleanor in 1394 was arrested in London for prostitution and sodomy. She presented herself as female and worked as an embroiderer and a barmaid (the only jobs held by women in the medieval times) as well as a sex worker. There is not much recorded about Eleanor, because her identity was wiped off and her story brushed aside saying she was just a straight man who cross dressed. This is mind boggling because she presented as female not just in her life, but for her trial as well. Historians find Eleanor’s case interesting because it gives insight into the views medieval people had around gender and sex.

A rebellious tomboy, Jack was assigned female at birth. At 15 years of age he escaped from convent through a brief marriage. In 1897 he was arrested for impersonating a male in Stockton, CA. In 1899, he adopted the male identity of Beebe Beam while accompanying the army in the Pacific theater of the Spanish-American War. There he was discovered as having been born a female by the captain of his ship and wasn't allowed to board the ship again. His fellow soldiers gave Beam a uniform and hid him until they were safely away from port. After a year he returned to the U.S. and published “My Life as a Soldier” in the San Francisco Examiner in 1900. When San Francisco passed a law banning the wearing of opposite sex clothing in 1903, he took on his chosen name Jack Bee Garland and devoted his life to working with the American Red Cross and other charitable trusts.

She was assigned male at birth and as a young child Lucy told her parents she wanted to be a girl and go by the name Lucy. Her parents took her to the family doctor who told them to respect her choice and with their support she transitioned. She eventually got married to a man and divorced. It was her second marriage that got her into legal trouble. At her time, the word transgender wasn’t coined. When it was discovered that Lucy was born biologically male, the district attorney decided to prosecute her for perjury. According to him, Lucy committed perjury when she signed the marriage license application and swore that there were 'no legal objections' to the marriage. Lucy stayed true to her statement "I defy any doctor in the world to prove that I am not a woman. I have lived, dressed, acted just what I am, a woman.” Sadly she was sentenced to imprisonment.

A pioneering radiologist, physician and tuberculosis researcher, he is remembered for his breakthrough discovery that x-rays can be used to detect tuberculosis. He attended medical school presenting female and later was one of the first people to undergo gender affirming surgery and live as a man full time. After WW2 he was also able to begin hormone replacement therapy. Dr. Hart went on to get married, publish several books and have two medical practices.

He was an activist and one of the more influential trans men of early 20th century because he was gay and played a crucial role in changing the medical diagnosis and treatment of transsexualism. He was also a driving force in creating a community for trans masculine people. Being homosexual excluded trans men from receiving gender confirmation surgery at that time. Lou campaigned and made it possible for other gay trans men to obtain surgery services as part of their transition. He succeeded and had his surgery in 1986. He also founded the first known peer support group in the US for Female-to-male individuals called FTM International.

These are few names in the trans community that are popular even today throughout the world because of their honesty to their true self inspite of rejection from society and many times family. Their contribution has encouraged us to reach where we are today.

Historically, our culture has not made room for the nuances of humanity. People have not been kept safe: women, people of colour, queer people, transgender people.

Finding who we are and learning to love who we discover we are is a process. Our society still has prejudices, but when we choose who we are and when we stand up for what is right, justice follows and we make history proud once again.