Pop culture is a machine which impacts us in ways which we don’t normally realize. It affects our opinion of ourselves, and how gender is “supposed” to behave. Here’s something to think about: there was a time, in the 80s and 90s when men were shown in movies and shows to have chest hair and that is what became associated with “manly.” Now, men are shown with shaved chests and that is what is considered “manly.” Gender and how pop culture represent them helps us form an opinion of not just how we’re supposed to behave, but even what we’re supposed to consume. One of the most glaring examples of this is women using their initials when publishing books so that they appeal to a larger audience.

Here are a few instances where pop culture’s use of gender stereotypes plays a subliminal role in affecting our thoughts:

How many times have we heard don’t judge a book by its cover? And yet, cover designs have a huge impact on whether or not you pick up a book. Here’s an excellent example of how gendered book covers can detract you from experiencing a piece of literature and how book covers are trying to be more gender neutral.

A rough adaptation of the book series “A Song of Fire and Ice”, the show depicts the fight among various kingdoms for the control of central seat of Westeros. The characters’ arcs move in different directions driven by their agendas and situations – often pushed through incidents of extreme violence such as rape, murder or even body mutilation. One of the key aspects of the series was the very portrayal of these acts of violence. The writers and producers often defended their life-like visual as being true to the story’s narration but many critics believe that they served a dual purpose.

Mostly acts of violence against women are depicted in vivid detail not just because they push the story’s gore or impact but also because they serve as a titillating feature to the visual experience. That in process they often serve as erotica to the viewers and hence make for an engaging watch – for other purposes as well.

Another gender stereotype that we see is how differently angry men and angry women are portrayed in pop culture. Men often get to beat their chests and showcase righteous anger which often leads to violence as they work towards righting a wrong. It is them avenging a slight on their honour. In the case of women however, this anger becomes almost petty, childish and vengeful. Even in myth, while men wage war in the name of honour, it is the woman who is blamed for the death of men and for the war.

While Menelaus’ anger over Helen leads to the Trojan War and the wiping out of an entire city, Maleficent’s anger is shown as fickle and not worthy of avenging the wrong that was done to her.

The point of this exercise is not to take away from the joys of watching or reading. The point is to sensitize you to how the “should” of gender is so deep rooted that we as consumers may not even realize it. But as bloggers and content creators, it is our responsibility to put forward an image that is more nuanced and inclusive. It does not try to fit people into boxes but finds its own path.

Now that you have an idea of what gender and sex is, here are a few recommendations from team Blogchatter you can watch/read to further form your own understanding of why talking about gender is critical in 2021.

Queer Eye is a television franchise based upon a team of gay professionals (the "Fab 5") giving lifestyle and fashion makeovers to guests. The award-winning show has been a global success within audiences, and is known for its strong representation amongst the LGBT community and communities that include people of colour.

While the entire series is an interesting insight into the LGBTQ community and their stories – this particular episode deals with the journey of a transgender man and his struggle to establish his new identity. The most nuanced part of the episode is how the Fab 5 themselves discover many challenges of the transgender community which they had not been sensitized with.

The wealthy Rose family lose their entire fortune after being cheated by their business manager. Driven out of their house and their affluence, the Rose family end up in Schitt’s Creek – a small town in the suburbs of USA which Johnny Rose (the patriarch of the family) bought as a joke for his son David’s birthday. The show while dealing with many tracks has been most praised for its sensitive and progressive take on sexuality as a theme. From pansexuality to gay romances, the narrative has been heeled on normalizing the conversation around choices and freedom to be.

Australian comic Hannah Gadsby reshaped standard stand-up by pairing punchlines with personal revelations on gender, sexuality and childhood turmoil. She reveals experiences of homophobic and sexual violence, which escalate throughout the set, until finally she is delivering them from a precipice of rage. “This tension is yours,” she tells the stunned Sydney Opera House audience. “I am not helping you with it any more. You need to learn what this feels like.” One of the most nuanced pieces around art, sexuality and of course gendered violence – this is a masterclass in writing and creating content that hits all right notes.

A mini series, this is a wonderful depiction of when the movement around the Equal Rights Amendment. All feminists led by Gloria Steinem rally to ratify it and Phylis Shlafley, a conservative activist opposes it. With mindblowing performances, this show is a great watch that catches the modernist's eye in terms of gender equality.

Margarita with a Straw

Laila Kapoor, a teenager with cerebral palsy is an aspiring writer who finds herself on this surprising journey of discovering her sexuality. From being confused to stumbling on her attraction to women to eventually confronting her conservative mother with this information, Laila goes on a roller-coaster ride in the movie. At heart a movie about relationship with mother and daughter, the story is about normalizing experimenting with one’s sexuality and discovering self through it all.

Einar and Gerda are an artist couple. Our first glimpse of Lili is when Einar holds a dress against himself and Gerda paints the image. From there on out, the movie showcases how Einar transitions into Lili, and how Gerda deals with this. You can feel Gerda’s pain when she says, “Where’s Einar. I need my husband,” and Lili tells her that it was only ever Lili, Einar was the mask. Though Gerda struggles to accept Lili, the love that she has, first for her husband, and then for Lili is there to be seen.

A professor is sacked on the grounds of "immorality", allegations and harassment follow, owing to his sexual orientation. It is a heart wrenching tale that will leave you wondering how strong our stereotypes are engraved in us.

A coming of age story about an African American man, told in three stages of his life. This movie stirs up all emotions by the way it addresses racism, masculinity, coming to terms with sexualtity. It is a rare depiction of what it means to be gay as a person of colour and therefore isolated. Moonlight became the first film with an all-black cast, the first LGBTQ-related film, to win the Oscar for Best Picture.

This 1987 English romantic drama based on the 1971 novel by E.M.Forster (he was a closeted gay man himself) is one of the greatest queer romances. Although it was written in 1913, it was published posthumously after the legalisation of homosexuality in the UK. Maurice is the gay period drama that was way ahead of its time in terms of theme. It is a story of homosexual love in the early 20th century England where homosexuality was still considered a puniishable offence of the 'Oscar Wilde sort' (quoted from the movie.) The story throws light on societal conventions that limited queerness to just 'evil hallucinations' and how the characters ultimately had to make a choice between status and love.

If Meghan Markle and Prince Harry’s story left you misty-eyed, then this book is for you. The First Son and the Prince have a very public fight and it leads to a global incident. The President of the United States cannot afford for it to look like she’s in a fight with the Queen of England so the two boys must now fake a friendship to smooth ruffled feathers. The Prince is in the closet, and the First Son is straight. But they fall in love and have a whirlwind romance that spans UK and USA, bodyguards, breaking into the palace and a presidential race.  A cute romance, this one will make you giggle, laugh out loud and remind you of when you were 21 and epic romances were still a possibility.

The Song of Achilles by Madeline Miller

If you’re familiar with the Homeric Iliad, then this story may not come as a surprise to you but for the fact it is from Patroclus’ point of view. This reimagining of the Trojan War, and of the developing friendship and then romance between Achilles and Patroclus will leave you wanting for more.

The Awakening by Kate Chopin

Woman exploring and struggling to achieve sexual emancipation in a patriarchal society of 1800s. A bold and descriptive book way ahead of its time, this is a story of freedom and daring to tread into untouched territory.

Oranges Are Not the Only Fruit by Jeanette Winterson

Quirky coming of age story of a girl entangled in religious zealotry and her growing lesbian sexuality.

The Color Purple by Alice Walker

Set in the early 20th century it depicts the life of African American women and the trauma faced due to the patriarchal society they lived in. What's beautiful about this book is that it is a story of the path to liberation, empowerment- when they chose to speak up against domestic violence and sexual abuse. The Color Purple is sure to elevate your spirit and reaffirm your belief in hope. Once you read this book, there's a movie based on it too- so definitely check it out as well.

A sister and a brother falling in love with the same person, a nameless boy who stirs their lives in different ways, Cobalt Blue is a heart wrenching tale of emotions running haywire as the youngsters try to come to terms with their sexuality while bound by family and cultural restraints. Translated from Marathi, yet retaining the subtleties in such a way that you'll feel transferred to the Maharashtrian household the story is based on, this book is a must read to understand how our culture impacts gender and sexuality.

An e-course by the University of Iceland and the Gender Equality Studies and Training Program (GEST) under the auspices of UNESCO called Gender and Intersectionality. You can read more about it here.

A Ted Talk by Ugla Stefanía Kristjönudóttir Jónsdóttir, who is a trans and queer activist from Iceland. Their topic of discussion is Moving Beyond the Binary of Sex and Gender. Liza Donnelly is a cartoonist who uses her talent to depict and challenge gender perceptions.

These are some for your starter kit. Stay tuned for more through our activities and interesting chatter around gender! 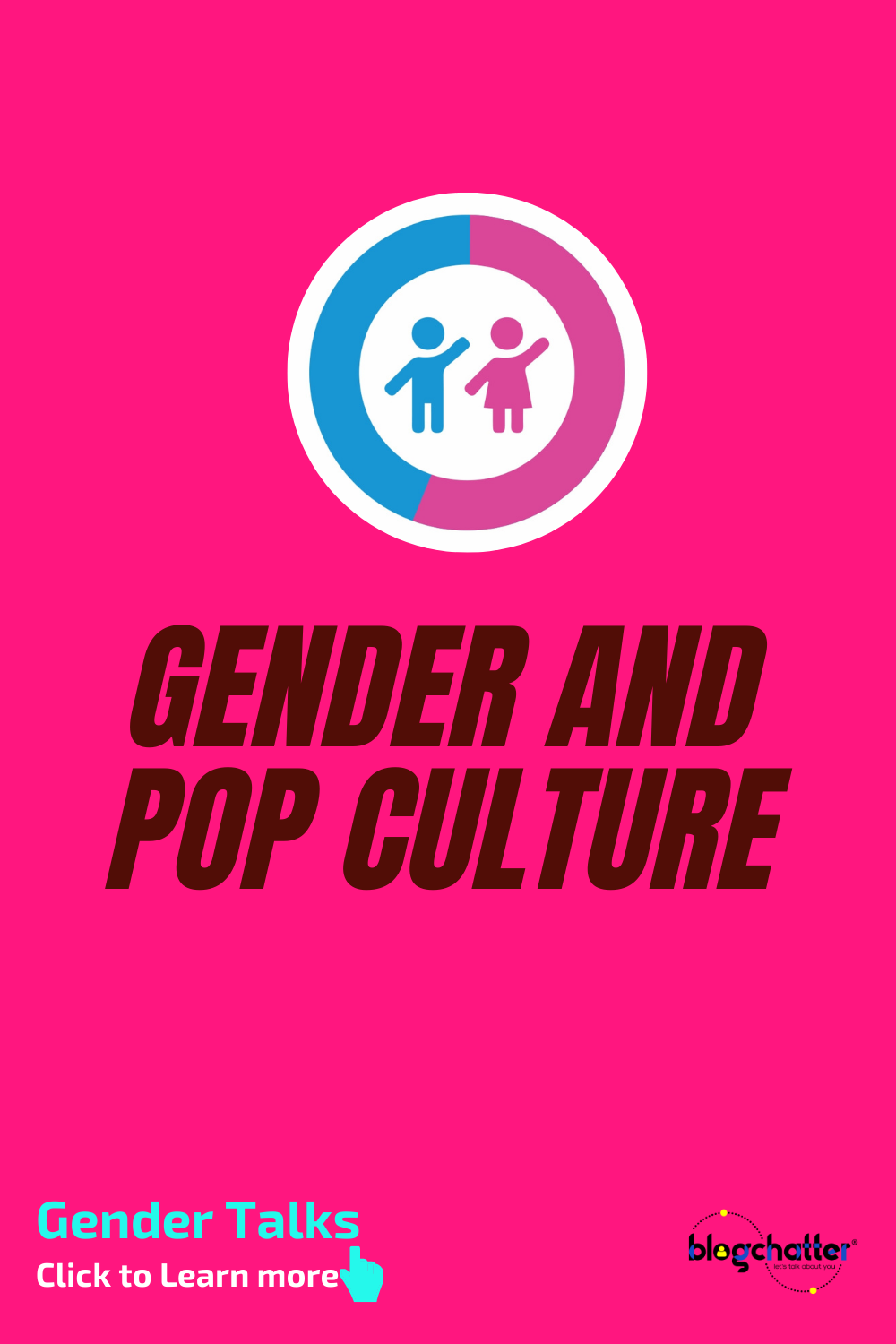 PS: you can learn more about Gender Talks here and if you would like to add your voice to the cause, click here.