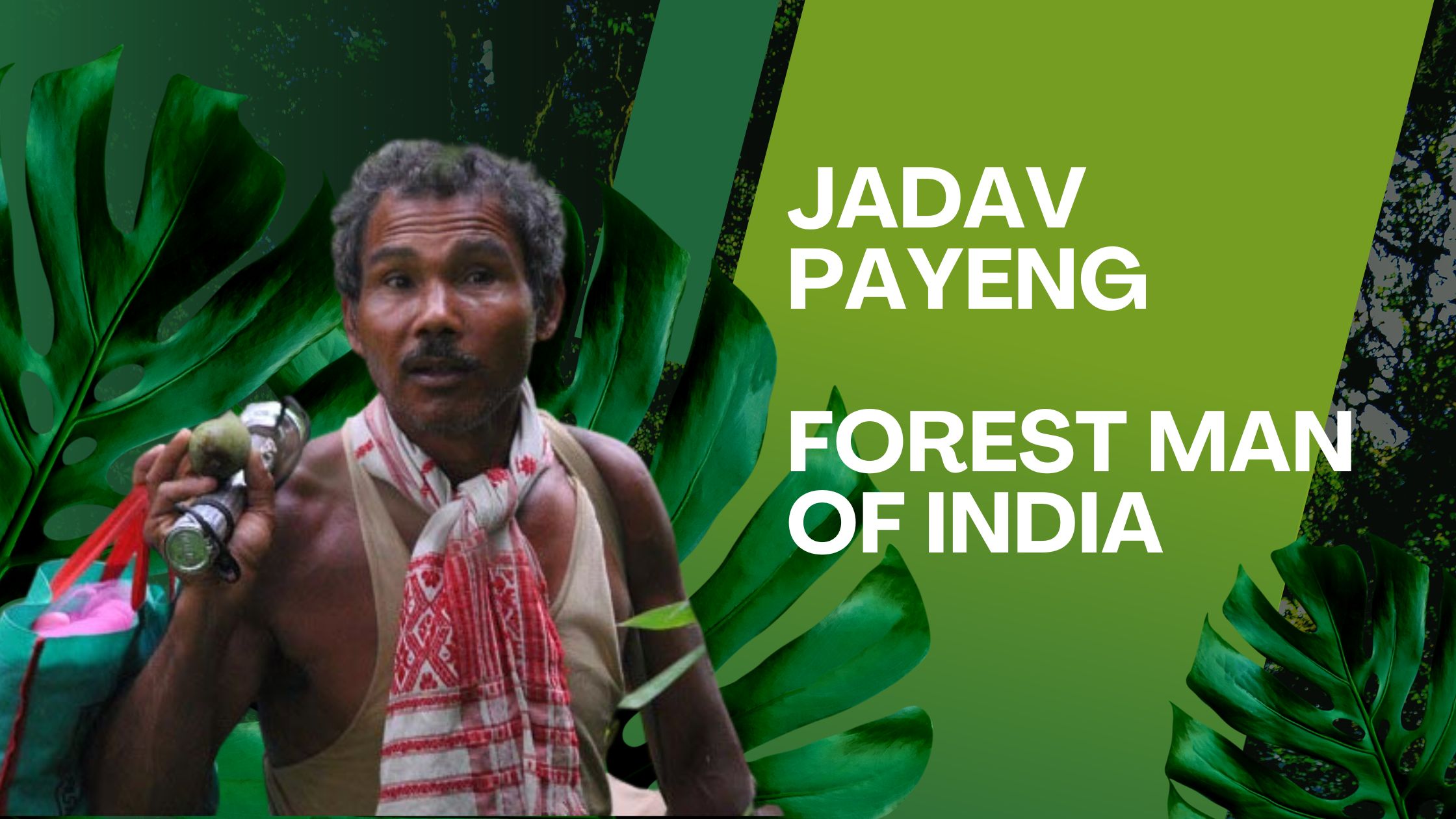 A 16-year-old, Jadav Payeng started planting a tree sapling a day. Today, with that one-tree-a-day practice, he has single-handedly created a forest sprawling over the size of 15 football fields.

Jadav “Molai” Payeng born 31 October 1959 is an environmental activist and forestry worker from Majuli, popularly known as the Forest Man of India. The forest, called Molai forest after him, is located near Kokilamukh of Jorhat, Assam, India and encompasses an area of about 1,360 acres. Over the course of several decades, he has planted and tended trees on a sandbar of the river Brahmaputra turning it into a forest reserve.

Inclination towards plants at an early age

A native of Kokilamukh in Jorhat, Payeng developed an inclination towards plants in early life as he went to study at Nobinang Boligaon village. There, lived Dr Jadunath Baijpura an agricultural scientist who loved teaching kids about plants through practical learning. As Payeng started planting saplings of different types, he and his mentor realized that he has a natural gift as saplings planted by him grew faster especially paan (betel). Under his tutelage, Payeng kept his passion alive for plants and after studying till class X, he has been growing his forest for the last 42 years, starting in the year 1979.

Molai forest- a home for many animals

The forest, which came to be known as Molai forest, now houses Bengal tigers, Indian rhinoceros, and over 100 deer and rabbits. Molai forest is also home to monkeys and several varieties of birds, including a large number of vultures. There are several thousand trees, including valcol, arjun, ejar, goldmohur, koroi , mojand himolu etc . Bamboo covers an area of over 300 hectares. A herd of around 100 elephants regularly visit the forest every year and generally stays for around six months. They have given birth to 10 calves in the forest in recent years!

His efforts became known to the authorities in 2008, when forest department officials went to the area in search of 115 elephants that had retreated into the forest after damaging property in the village of Aruna Chapori, which is about 1.5 km from the forest. The officials were surprised to see such a large and dense forest and since then the department has regularly visited the site.

In 2013, poachers tried to kill the rhinos staying in the forest but failed in their attempt due to Molai who alerted department officials. Officials promptly seized various articles used by the poachers to trap the animals. Molai is ready to manage the forest in a better way and to go to other places of the state to start a similar venture. Now his aim is to spread his forest to another sandbar inside of Brahmaputra.

Jitu Kalita, a wildlife photographer from Jorhat in the year 2007 was first to discover his efforts during a routine jungle trip and had later written about him in Assamese ‘Daily Janambhumi’ and this was followed by many publications approaching his forest and highlighting his efforts in the year 2008.

Jadav Payeng was honoured at a public function arranged by the School of Environmental Sciences, Jawaharlal Nehru University on 22 April 2012 for his achievement. He shared his experience of creating a forest in an interactive session, where Magsaysay Award winner Rajendra Singh and JNU vice-chancellor Sudhir Kumar Sopory were present. Sopory named Jadav Payeng as the “Forest Man of India”. In the month of October 2013, he was honoured at the Indian Institute of Forest Management during their annual event Coalescence.In the year 2012, Jawaharlal Nehru University had summoned him to its campus, and after assessing his wildlife knowledge for three days, he was honored with the title of ‘Forest Man of India’. Later President of India APJ Abdul Kalam had also honoured him with Rs 2.5 lakh cash prize and citation. In the year 2015, he was awarded Padma Shri, the fourth highest civilian honor in the country.

His character was the basis for a fictional film made by a Tamil director Prabhu Solaman casting Rana Daggubati released in Tamil, Telugu, Hindi as Kaadan, Aranya and Hathi Mera Saathi. A locally made documentary film, produced by Jitu Kalita in 2012, The Molai Forest, was screened at the Jawaharlal Nehru University. Jitu Kalita, who lives near Payeng’s house, has also been featured and given recognition for good reporting by projecting the life of Jadav through his documentary.

The 2013 film documentary Foresting life, directed by the Indian documentary filmmaker Aarti Shrivastava, celebrates the life and work of Jadav Payeng in the Molai forest. These are also the focus of William Douglas McMaster’s 2013 film documentary Forest Man.With US$8,327 pledged on its Kickstarter campaign, the film was brought to completion and taken to a number of film festivals. It was awarded the Best Documentary prize at the Emerging Filmmaker Showcase in the American Pavilion at the 2014 Cannes Film Festival.

Payeng is also the subject of the children’s book Jadav and the Tree-Place, written and illustrated by Vinayak Varma. The book was published by the open-source children’s publishing platform StoryWeaver, and its production was funded by a grant from the Oracle Giving Initiative.

The forestry veteran has undertaken plantation projects in many countries like France, Switzerland, Bangladesh, Taiwan, Arabic countries; now has undertaken a forestation project in Mexico where he will work with local students for the next ten years, three months each per year.

If you were inspired reading this CauseAChatter story and have one to share too, reach out to us here.

You can also join us at CauseAChatter and have meaningful conversations around the cause.