This book describes the events leading up to the accession of Hyderabad, the efforts for which had begun even as India approached the date of independence. It was only after negotiating as much as possible that the Indian union finally decided to go for a direct military solution. This piece of History, which is very much a part of the efforts to create a unified India, has not been given the prominent place it deserves in the annals of unification of the princely states. Manreet Sodhi’s book does this very thing with plenty of elan and aplomb. 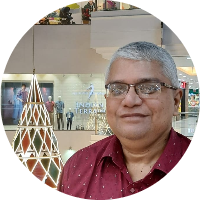 Sitharaam Jayakumar, known to his close friends as Jai, passed out of IITBHU, Varanasi as a Metallurgical Engineer in the year 1988. He has been working as an IT professional for more than 27 years. He started his blogging career in the year 2017. Initially, he started writing poems which were followed by articles on a variety of topics. He dabbled in some photography and soon he began writing fiction. He has published two books on Amazon KDP in the suspense thriller genre with the titles 'Eighty Hours To Save Karen' and 'The Krishnapur Kidnappings'. Five of his poems have been published in a book of poetry titled 'Melodies of Spring'. He has also written a short story named 'Varied Moods, Varied Seasons' in a book of anthologies titled 'A Fallen Leaf' published by a writers group called Penmancy. When it comes to non-fiction Jai writes articles on anything that catches his fancy in everyday life. This could be sports or politics or any current event of importance. He also writes book reviews.