Internalised colourism and how it affects a millennial woman

As liberated woman of the newest millennium we treasure our sense of self-worth and make our own choices. We don’t just stop at that; we take every opportunity to shout out of our social media balconies that we are empowered and influence social change. It is a great time to be born as a woman.

It was inspired by a speech given by Amy Poehler at the United States of Women conference hosted by the then president Barrack Obama. Poehler roared that media must begin depicting women three dimensionally. What did she mean? Gone is the era of Poster Girls, we want to see real women for a change.

The path is steep and littered with colourism. Indeed it is very pale. What would cleanse our mind is a heavy dip in a pool of mud and emerging proudly yellow, brown or black and the numerous shades in-between. To date 90% of the media we consume both print and visual portray pale, spotless skin with sculpted figure, prominent cheekbones, bee stung lips and luscious hair. How liberated are we when we still believe fair is beautiful?

Deep rooted practice of exclusion based on skin colour starts right from comparing children’s skin tone with their siblings. Moving deeper it stems from a popular practice in India, right from life in-utero when the pregnant mother is fed saffron milk to lighten a new born’s skin colour.  India society is complex and diversified. A number of variables play vital role in colour of an Indian skin. Indian as such are a conglomerate of races and their skin tones vary from fair to dusky depending on the geographic location they hail from. 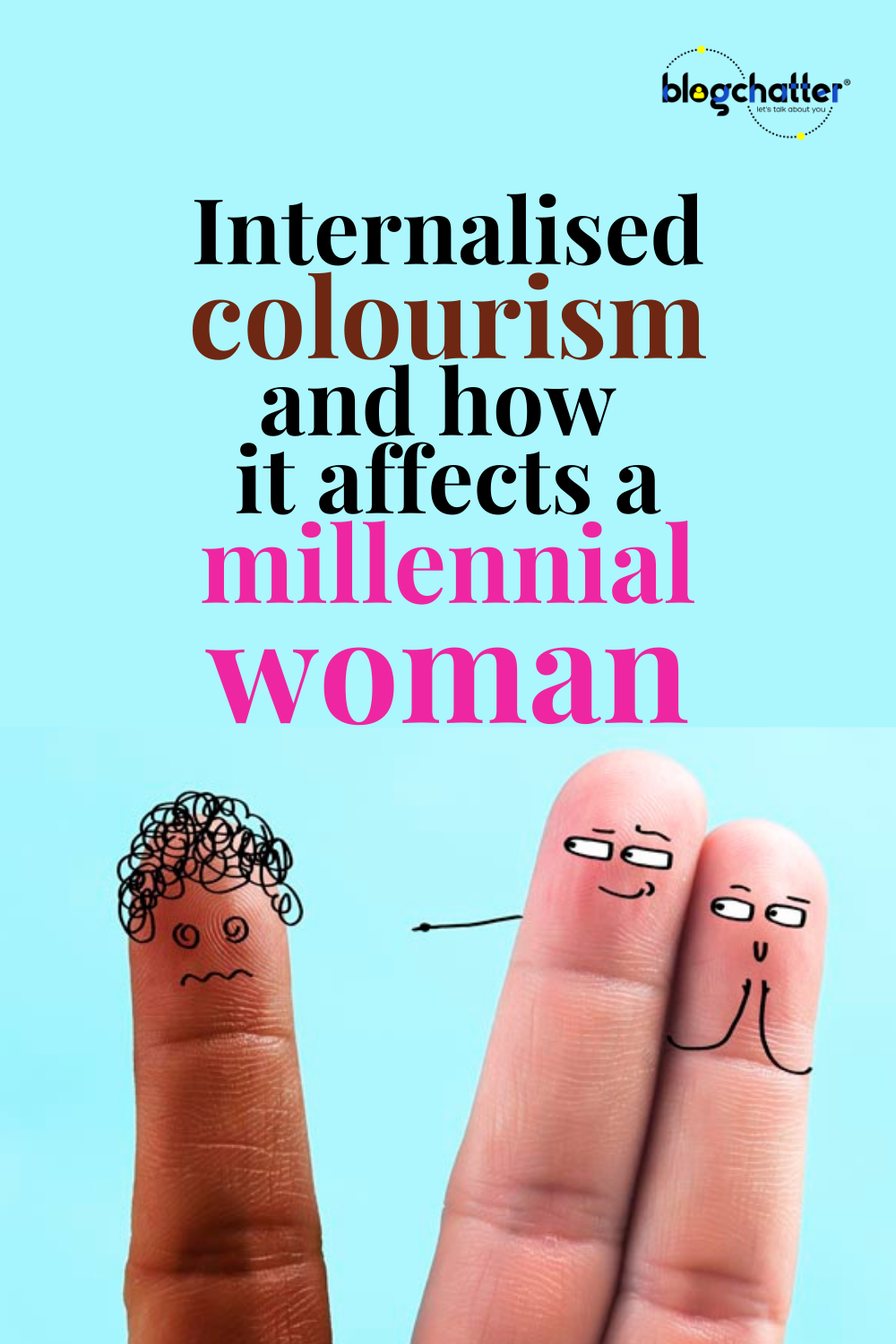 The gross misinterpretations of the Varnas of ancient Indian society with evolution lead to formation of four oppressing orders of castes which became birth based and rigid. Noble occupations were carried out by the so-called higher castes and unclean, polluting jobs were handed to lower castes. Close scrutinization showed that education and upliftment was denied to the dark-skinned lower castes and mixing of castes in marriage was vehemently opposed. This colourism and discrimination intensified and escalated during the colonial era where the British were treated as bosses. Till date a firangi is glamorized and look upon with fascination by Indians and so is their skin colour which is the gold standard of beauty.

The prejudice over colourism is reflected in many walks of the society through songs in our cinema and advertisement billboard. It comes a step closer and seeps into our living rooms with relatives comparing the skin colours of family members. For generations together we have been conditioned to believe that a fair skinned girl was likelier to get married than one with dark skin. Colourism and patriarchy are intimately intertwined.

A milestone study conducted in 2015 about Indians perspective on colourism threw an alarming light where 70% of college students who undertook a survey answered that fair meant beautiful and in fact more successful.

As early as 2009 Nandita Das and ‘Women of Worth’ joined hands in the ‘Dark is Beautiful’ movement. In her powerful video titled ‘India got colour’ she showcased an army of celebrities in a black-coloured theme who raised voices against discriminating coloured skin in India.

The unfair and lovely campaign was originally launched by Pax Jones a photographer in Texas. It was a campaigned to uplift the beauty of dark skin on camera. It was ‘Tamil Centred’ featuring women from Sri Lanka and South India.

In 2014 the same team took Instagram by storm along with the ‘Reclaim the Bindi’ movement that talks about cultural representations of the Bindi through which women reclaimed their rights. Both the campaigns centred around women self-esteem and were targeted against a popular skin care brand that professed women with fairer skin achieving better in life.

Their biggest breakthrough came in 2020 when the multi-million-dollar skincare company that has been branding for decades that fair skin is successful in life for women admitted its mistake and changed the name of its brand. What is in the name one might argue. The skin care brand still sells popularly in the South Asian sub-continent.

Another detrimental by-product of colourism is the growing market for skin lightening treatments and the detrimental health risks this poses. Any skin lightening cream or treatment often aims to reduce production of melanin. Melanin is the pigment that is produced by our skin and responsible for our variety of skin colours.

Popular injection of skin lightening agents or consuming them as whitening pills works because it is anti-melanogenic.

The role melanin plays in our skin is not be taken lightly:

It is much worse in African countries where the government struggles to control the sales of detrimental skin lightening treatments and pills. A report in 2017 estimated the sale of skin lightening products to hit as high as 8.7 million dollars by 2024. With the global outburst with ‘Black Lives Matter’ campaign and protest against colourism the skin care brands have removed the word lightening from their branding agenda. Nevertheless it will take years of systematic shouting from the top of our roofs to eliminate this from our societies. The products are still available on the market with brilliantly though euphemisms such as glowing, bright radiant and clear.

Impact of colourism on social performance

In India with majority of the population being described as ‘dusky skinned’ still beauty pageant representation of India on a global platform only showcases women with fair skin. It is alarming to see how colourism has influenced employment status as well. Media is rife with images of fair skinned people and this silently reinforces the fair is beautiful analogy in our minds. Studies have shown that skin tone bias plays a more vital role in recruitment as opposed to educational qualification and experience. A survey based study showed inequality in pay scale and promotions for people with darker skin tone - especially women in India.

How to heal from colourism?

Like any other major player like racism and sexism that challenge social equality in today’s millennium, colourism must also be addressed loudly and called out for its bias. Social media is a powerful tool for expression about colourism especially to the young impressionable population. We can truly heal from within only if we equip ourselves with knowledge first.

Human Resource departments in companies can play a major role in destroying inequality based on colour bias by conducting workshops and empowering their employees. Establishing strong objective criteria for recruitment can also help bypass this bias.

The media shift will make a huge on social changes as well. We need representation of the Indian skin in advertisements for skincare products and in general media as well. Print media is still a powerful tool for social change and more and more powerful articles addressing colourism can sustainably bring about change. There are numerous books that address internalized colourism in effective manner for various ages and cultures.

I cannot reinforce the responsibility we have as millennial parents to address this to our children as they grow up in a culture bereft with colourism support. They are indeed the future world and as the popular saying goes - Charity Begins at Home.

This was written as part of guest posts. To learn how you too can pitch us and earn reward points, check out this post.